(this was originally posted on VolksRods.com while I built the car) 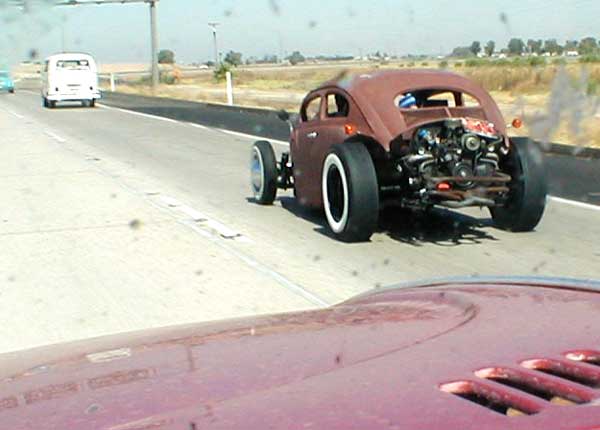 I began this project in September 04. I busted my ass for a month or so, then shelved the project. I had a million other things to do. About a month before the Classic, Glenn and I decided it’d be fun to throw the car together and roll it. At this point, it was missing a rear wheel well and was just a rolling chassis with nothing.

Fast Forward to the weekend before the Classic:

A few friends came over on Saturday and Sunday. Everyone took a job– 2 guys did brakes and bearings/ seals, 1 guy started with some mud on the outside of the car, 1 guy stabbed the motor and I did the front end. Did I mention it’s hot as hell in AZ this time of year?

Fast Forward to Thrusday before the Classic:

I took off of work this day, the little details were killing us. At this point we had *no* wiring at all, a front drum that would not seat fully, 2 rear brakes that were clicking and making all sorts of racket, and no windows. Oh Yeah, my rear tires still had not shown up from Hurst in Oregon.

I woke up at 6 and scratchbuilt a harness for the car, Glenn showed up at 8 to sort out the motor. We worked our asses off that day. Around 1pm the DHL guy showed up with my tires, and they went straight to the local tire place to be mounted (but not balanced). Around 4pm we fired the car for the first time. We sorted out almost all the brake issues except an amazingly soft pedal. You could pump it up, but the first push went to the floor. Since everything in the system was new, I suspected it might be my linelock.

The tires came back from the shop and they looked great. We bolted them up and let the car down… the body sat flush on the tires. [img]style_emoticons/<#EMO_DIR#>/mad.gif[/img] After brainstorming a bit, the only answer was to raise the rear a spline back to stock. Since the body was channeled over the pan, this was HARD. After fighting for what seemed forever, it was finished with minimal clearance.

We took the car for a spin around the neighborhood to my co-workers house so I could give him the finger. He said I wouldn’t get it done. HA! Now, it’s like 7pm, we’re trying to get out by 8. I cut the windshield out of plexiglass then hopped in the shower and packed while Glenn wrestled the seal onto the plexi. I threw on some safety glasses and drove the car to Glenns house with no windshield. LOUD! When we got to his place, he packed and got a shower while Mitch and I tried to put the plexi in. No dice– we made it too tall. I had some blue tape holding the seal to the glass– that became the new seal. Classy!

The drive to Yuma:

So it’s like 11pm on thursday, we’re exhausted and we’re about to take an unknown car several hundred miles. We decided to cut tonight short and head to Yuma to stay at the house of one of the guys from the Arizona Bus Club. They were going to leave in the morning, seemed like a decent plan.
Finally, we were on the road, BUT I FORGOT MY CAMERA!

Either way, the car was just humming along, the sunroof/ seat placement is just right to gaze out the roof at the clear, star-filled AZ sky. That drive thru the desert was one of the best parts of the trip for me. It was clear and cool, the car was rolling— this was the culmination of a full week of non-stop work and worrying if everything was OK. And it was.

The ride was largely uneventful– we were getting used to the squeaks and groans the car makes, the tires were rubbing on the inner fenders a bit… steering was vague… Minor stuff. We got to Yuma around 3am-ish. and went right to bed. My ears were ringing from the exhaust note at 60mph in an un-sound-deadened tin can. 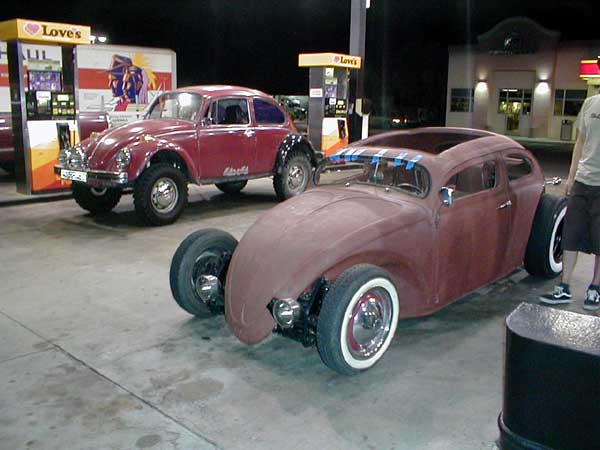 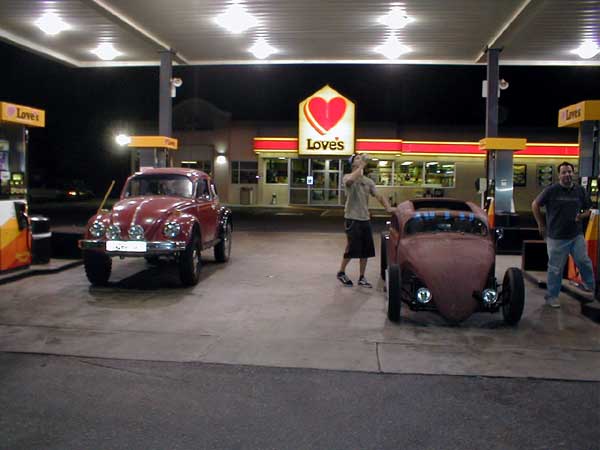 Yuma to San Diego, then LA

7am and I’m a zombie. there are a few beads of weld making up the re-radiused wheel wells that I never ground down… they were cutting into my new slicks. So, in order to piss of the neighbors, the grinder came out. 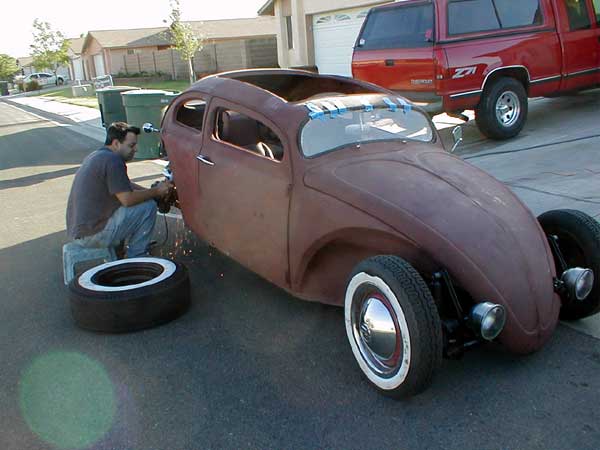 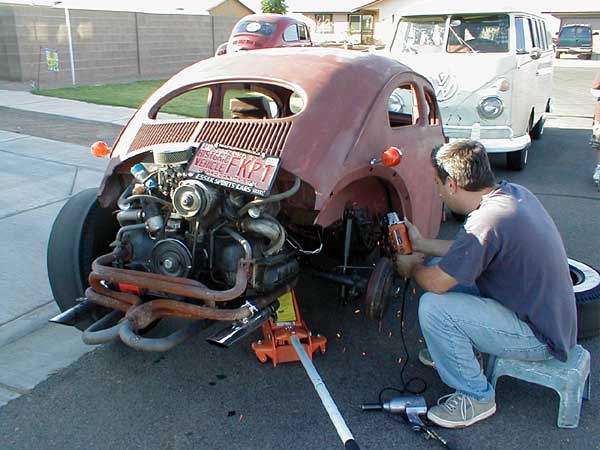 After trying to mess with the brakes and re-bleed them, we head out on the road with my still squishy brakes. Glenn called the ‘Highway brakes’. Works for me. 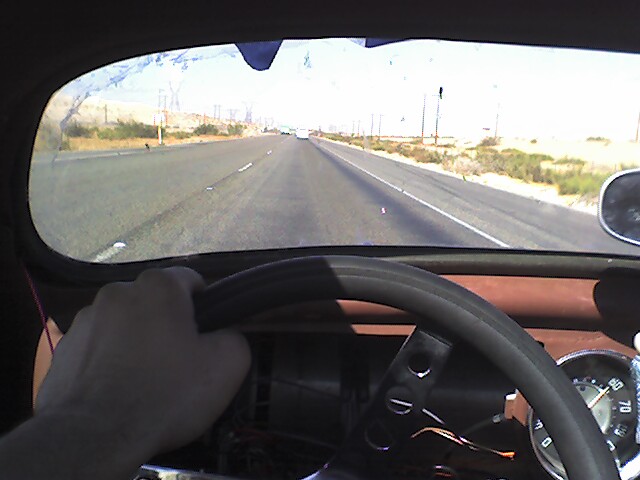 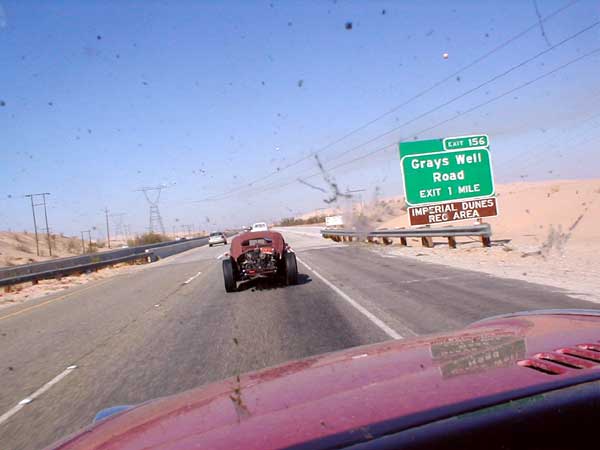 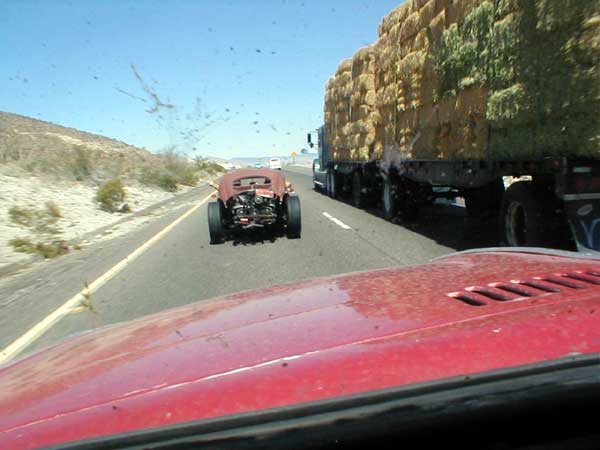 No issues, I was taking it easy the whole way. But Gawd damn… *everybody* on the road was checking it out. Some people slowed down to gawk, some took pictures, one guy driving a sweet 60’s Porsche Speedster held up a piece of paper with his phone # on it. I thought he either wanted to buy the car or get a date, so I had Glenn call. turns out– he wanted Oval parts.

To the Host Hotel

LA traffic sucks. I can’t imagine paying $700,000 for a house then never being able to travel anywhere due to the crowded highways.

Anyway, we roll in and it’s time to get a shower and figure out WTF is up with the brakes. 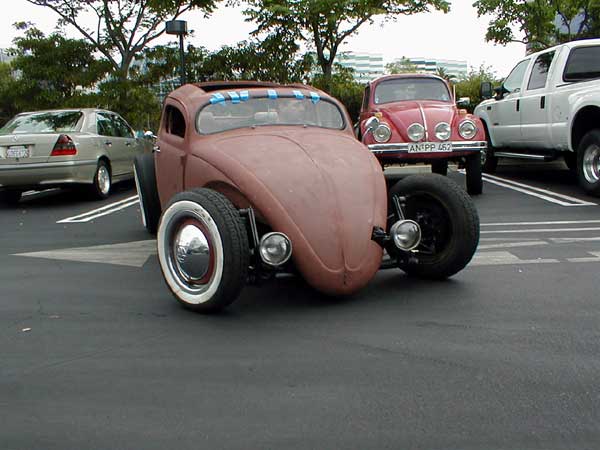 After seeing some leakage around the DS front drum, we decide that it’s a leaky wheel cylinder. Damn, that was brand new. Mitch, the guy with the class 11 bug, is the most prepared guy I know. He had a little pinch tool to clamp the line so I’d have 3 brakes. The pedal is now firm, but it pulls to the right. No big deal.
The carb is also acting up– but since this is the 1776 out of Glenn’s daily and not the Chopster’s motor (which isn’t finished), Glenn recognized the problem right away. We could either take it apart and repair it, or just live with a slightly high idle and have it want to stall a bit after crusing. I opted to leave it. We’re on vacation.
We bring the car out to the DKP cruise night @ Nicks and the car gets a pretty welcome reception. Hell, Mike Grady and I made it to the cover of Hoodride! 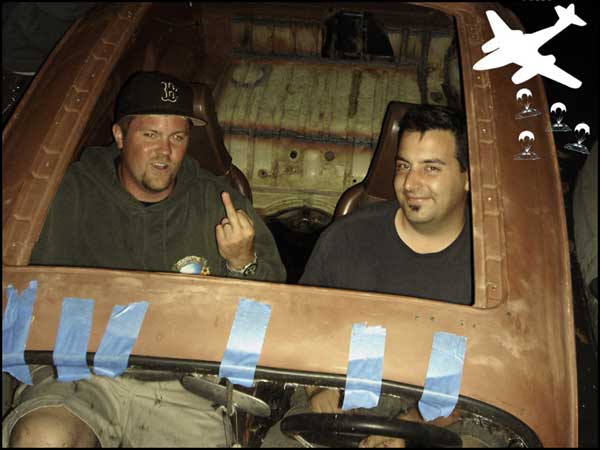 On the way back to the Hotel, I pass 3 cops on the side of the road with a pulled over Mustang. I got stuck at the light, and the car is far from subtle. One guy hopped in his car and pulled me over. As he walked up, the first thing he said was: “I’m sorry, I didn’t see your plate. Now that I do, I see it’s an AZ classic plate. We’re ok here.” He asked me if I was wanted or on the lam and looked at my license… then started asking questions about the car. He liked it— and let me go!!! 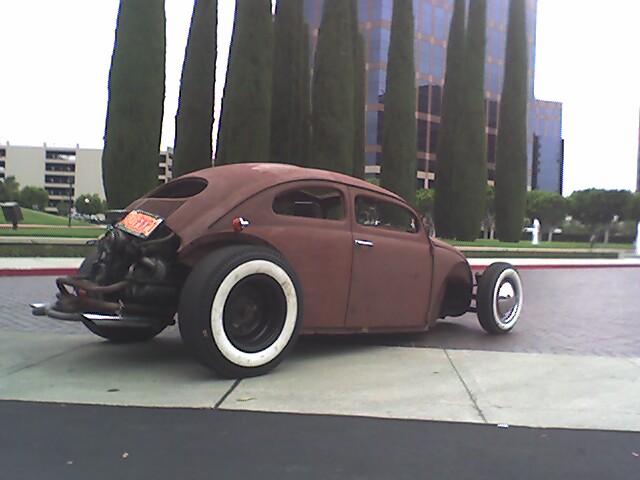 We got back to the hotel and had a beer or 10. A wedding was there and somehow Mitch got some chick to pose on the car. She was better looking with beer goggles, I swear. 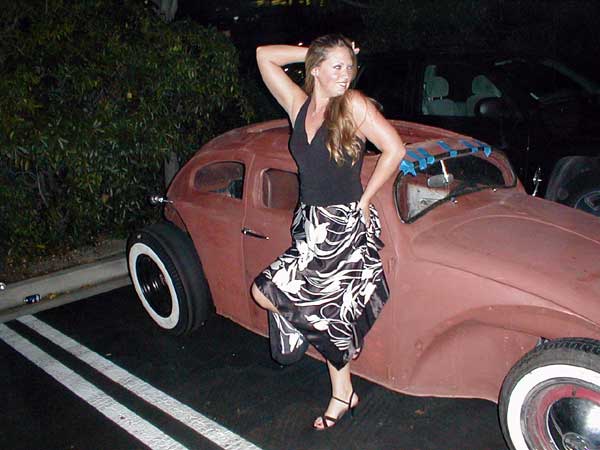 We woke up late and missed OCTO, so we got breakfast and went to the toy show. Afterwords we went to the Barndoor Mafia picnic at The Butcher Shop. I wanted to drink a few (vacation, remember?) so we took a friends Dodge. The carne was choice… and the busses were hot, too.
Back to the hotel to have a few more… I vaguely remember the car having a beer can mowhawk. And I think I gave it away to Mister Blue when I was arguing about Bon Jovi albums. Alcohol is funny stuff.

I got up early and left Glenn and Mitch in the room. They put me in line with the ‘special interest’ cars… I couldn’t figure out where the rest of the ‘rodders were. 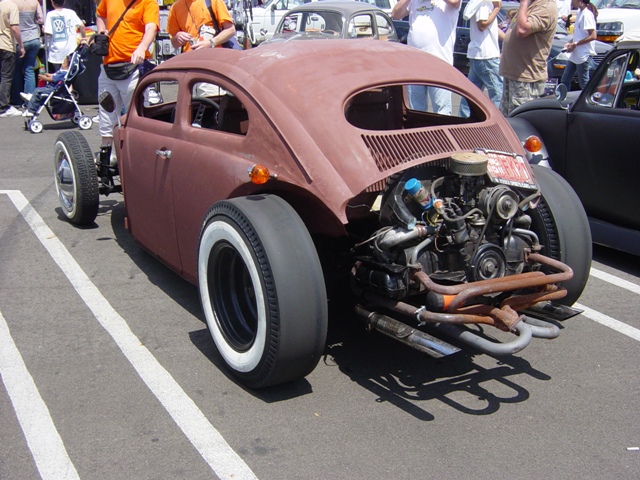 I met up with the few guys that were there, and talked to Randys’ guys… they decided to let me up front, too. 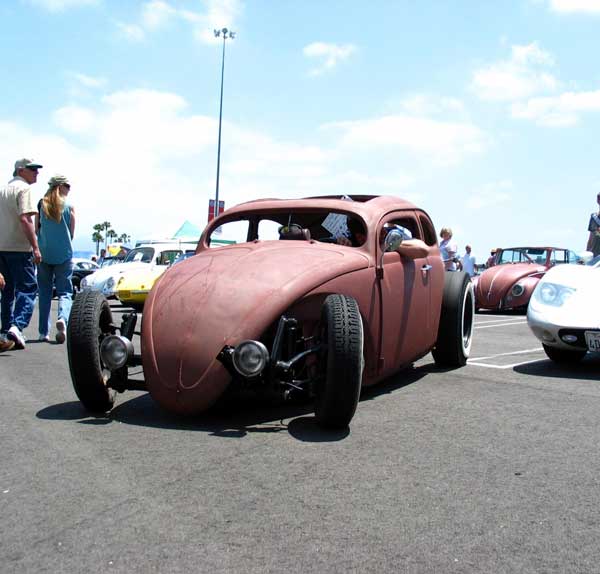 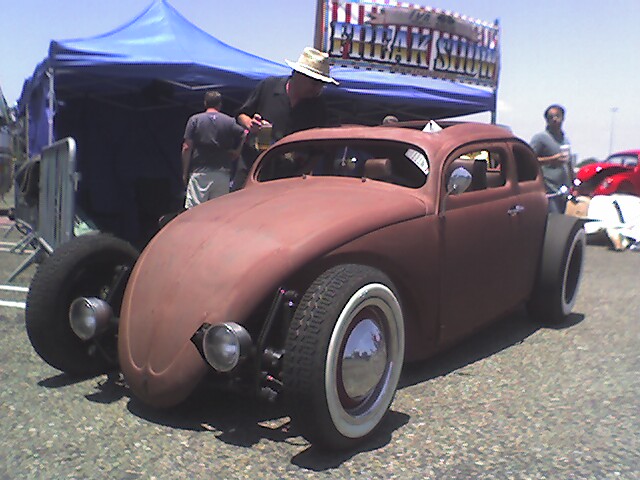 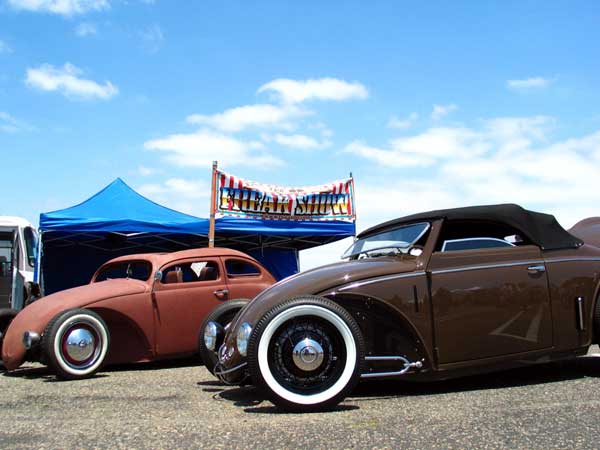 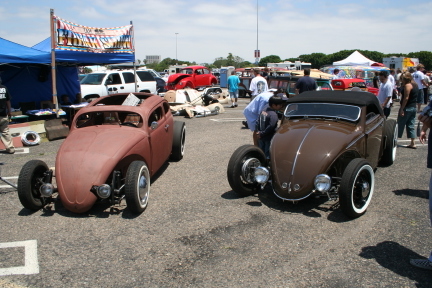 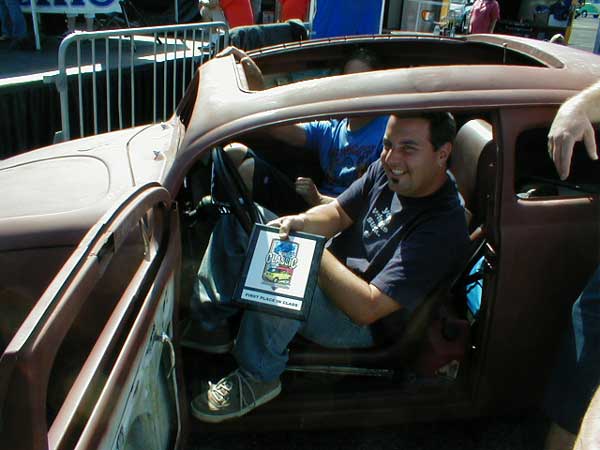 Normally, that’s a shitty way to win… but I have been dreaming about going to the classic since I got into VW’s a loooooong time ago. Something always came up. Last year was my first time there, but we didn’t take a vw. This was my first ever ride in *this* car– and the plaque was kinda like a ‘you made it!’ trophy. Sounds good to me. 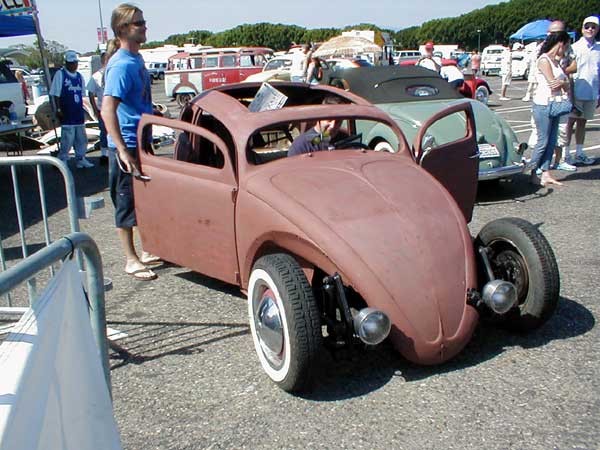 Unfortunately, I met an off duty cop at the show who *didn’t* like the car. I was telling someone about how the cop who pulled me over and let me go– and this guy busted in and read me the freaking riot act. To make a long winded story short– he said that the car had so many infractions in CA law that he would impound it if he saw me leave with it under it’s own power. After mulling it over and deciding if I wanted to chance it (this guys seemed like the type to camp me out), I ended up buying a towbar at the swap and hooking it to my friend Jay’s pickup. 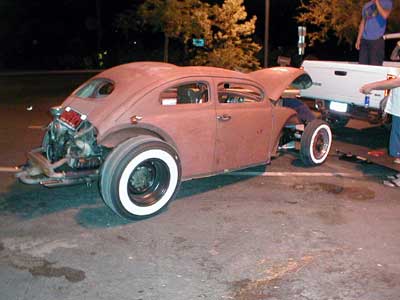 Towing it turned out to be harder than driving it— we lost the air cleaner, a hubcap and destroyed one of the front tires. I guess it was happier being driven.

We got to Phoenix and unhooked the car in the parking lot of a store. I headed home (I live about 25 miles out of phoenix) and ran out of gas. Luckily, I had a 2 gal container in the car– full. It was a pretty funny end to a FREAKING AWESOME WEEKEND!