Two types of glow plug systems are used on VW and Audi diesels, the normal glow system and the quick glow system. Testing procedures are the same for both but parts from one type of system must not be used in the other type. 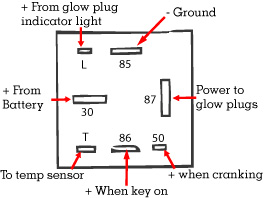 If the test light does not light:

If any of the test results are incorrect refer to the applicable wiring diagram and repair the problem (wiring or connections).

Connect an ohmmeter between terminal T and ground to check the temperature sensor.

If the resistance is out of this range check the sensor wiring and
connections. If they are o.k., replace the sensor.

If a problem is found and repaired, recheck maximum glow time.

If all test results are o.k. but the glow plugs still do not receive power, replace the glow
plug relay. 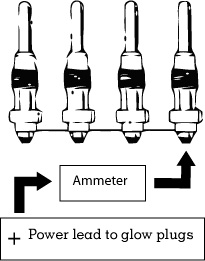 Connect an ammeter to the power lead for the glow plugs.
Turn the ignition key to the glow position.

Initial current draw may be as high as
140 amps but will stabilize to a steady
value after a short period of time. 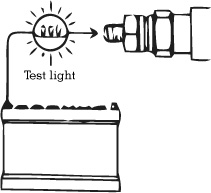 To locate bad glow plugs disconnect the bus bar from the glow plugs.
Connect a test light between the battery positive terminal and each glow plug.

Note:
If the glow plug tip is worn away, check the spray pattern of the injector and replace the injector if necessary.